Endless beaches, timeless ruins, welcoming people, oodles of elephants, rolling surf, cheap prices, fun trains, famous tea and flavourful food describe Sri Lanka- I have been endlessly amazed by the Sri Lankans’ ability to overcome disaster, war and myriad other challenges as they work tirelessly to make their country match its potential, while remaining some of the most charming people on the planet

As recommended by a family, we rented a car with Driver from Orayan tours. Our driver picked us up from the airport, helped us exchange pounds to local currency, got us two local sim cards and dropped us at the hotel. The hotel was the Best Western Elyon Colombo with a roof top bar, where we had our first Srilankan dinner under the sky with a full moon.

We started our journey south and our stops included the picturesque Bentota Beach with its coral blue water, Kosgoda Turtle Hatchery where we saw our first white (Albino) giant turtle, Galle Fort with is beautiful Dutch-colonial buildings, went island hoping (Cinnamon, Nurugala Temple etc.) on the Madu River where I also tried my first King Coconut from a floating coconut shop, sat down for the worst coffee of our life at Unuwatuna beach (a bit touristy and crowded) and drove through Hikkaduwa beach with a few stops to take pictures, until we finally reached our tent at Yala Safari Camping where we sat down by the bon fire while they served us barbecued food.

However, outdoor camping is not for you if you are a light sleeper! I could not sleep the whole night with cacophonous calls of the peacocks and the mooing of the cows near our tent!!! 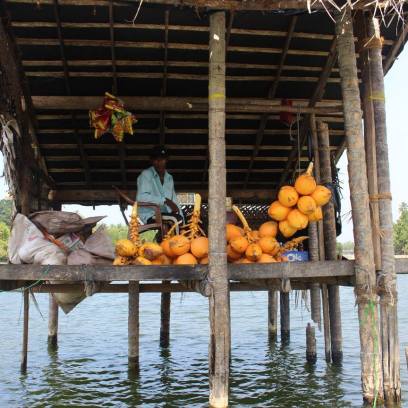 Note: if you are not hiring a 4×4, please note that you would not be able to take your car all the way to the safary camp site because th roads are unsuitable for small cars. In this case you may need to call the campsite for a pick up.

By 6am we were out for our Yala Safari tour in search of Leopards. Unfortunately, we didn’t have the luck to spot one but we did see lots of Peacocks, Water monitors, wild Buffalos, Deer and Elephants. After our Safari, we headed for the pretty little town of Ella, where we stopped to see the beautiful Ruwana (Ravana) Falls, road side stops to capture the scenic hill top areas until we stopped for lunch at the town center. After lunch, we took a 45 minuts walk on railroads to find the 9 Arch bridge and finally headed towards Nuwara Eliya, which is also known as the ‘Little England’. It is very popular for its colonial hotels, tea estates and the beautiful rose gardens. We sat down near the Gregory lake for a cup of tea before heading to Hatton for the night. 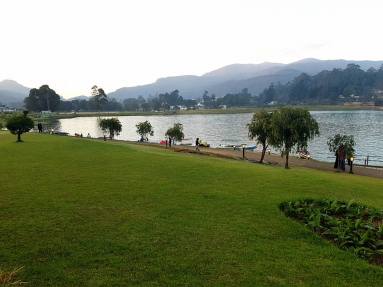 Note: If you have time, take a ride from Nuwara Eliya to Kandy or vice Versa on the train, which is supposed to be the most scenic train journeys of all time. It is better not to buy tickets in advance as the trains are frequestly cancelled due to weather and weather in Srilanka can be quiet unpredictable (Click for more info).

Our third day started at 1.30am at the foot of the Adam’s Peak. Adam’s peak is well known for the Sri Pada, i.e., “sacred footprint”, a rock formation near the summit, which in Buddhist tradition is held to be the footprint of the Buddha, in Hindu tradition that of Shiva and in Islamic and Christian tradition that of Adam (Google)

I must admit, it was one of the hardest trek of my life so far. 7359 ft. and 19 miles covered on foot to the summit. We stopped at several tea shops for a cup of tea and something sweet to give us energy and it took us nearly 4 hours to get to the top. Once we got there, it was just in time for sunrise. The Sri Pada temple was closed and everyone waited for sunrise. The wind was cold and it took a while for the sun to come out from behind the mountains but when it did, it blew us away and the beautiful shades of colour and the horizon in tune with the early morning prayer…. 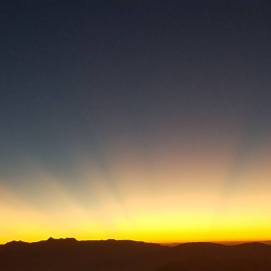 It took us only an hour and half to get down. However, this was the most difficult part for my partner as cliimbing down tends to put a lot of pressure on your knees. After a hard nights work, we had the best breakfast in a small local roadside restaurant which only served homemade food. We then headed off to the beautiful town of Kandy, tried the local Wattalappam dessert, enjoyed a colourful Kandyan cultural dance show and visited one os the gem stores nearby before calling it a day.

The next day after breakfast, we did a tour of beautiful Kandy city, strolled along the Kandy lake, visited Buddha Tooth temple (the tooth is only shown to public on special occasions), Dambullah Cave temple (Climbing stairs, stairs and more stairs!! but worth it), Hindu temple in Matale and finally the Medieval city of Polonnaruwa which is now an UNESCO World Heritage site.

Today the ancient city of Polonnaruwa remains one of the best planned archaeological relic sites in the city, standing testimony to the discipline and greatness of the Kingdom’s first rulers. Must see sites in complex are: Parakramabahu, Council Chamber, Kumara Pokuna, Hatadage, Rankoth Vahera, Gal Vihara and the Lotus Lake.

We had an 80-year-old tour toothless tour guide who took us around and explained the sites with their historical background in just an hour. You can pick up tour guides from infront of the ticket ofice and remeber to negotiate! 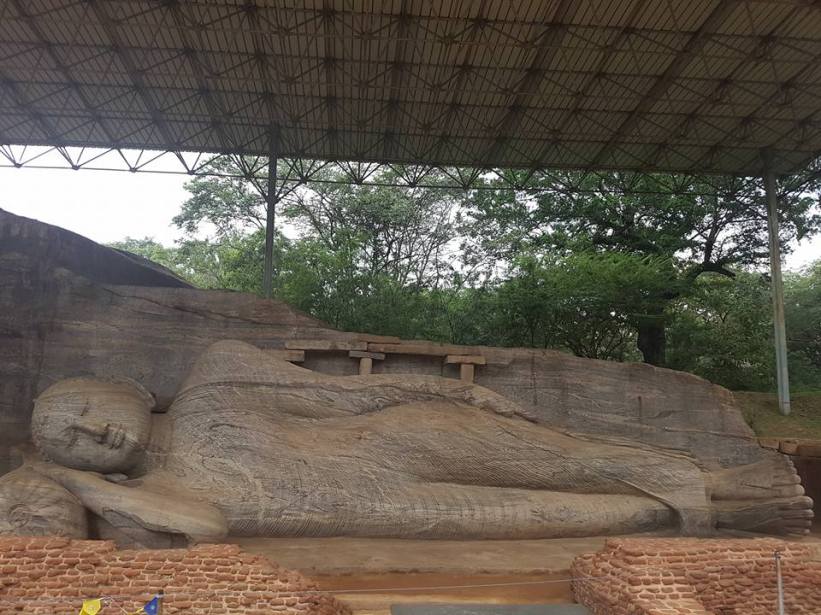 Also as a bonus we saw a wild elephant walking in the middle of the road!

It started raining the day before and didn’t stop the entire next day but it still did not stop us. Can not believe it had already been 5 days and we were almost towards the end of our round trip…we managed to climb up the Lion Rock at Sigiriya early in the morning and got caught in a storm half way there. is an ancient rock fortress located near the town of Dambulla. The name refers to a site of historical and archaeological significance that is dominated by a massive column of rock. According to the ancient Sri Lankan chronicle this site was selected by King Kasyapa for his new capital. He built his palace on the top of this rock and decorated its sides with colourful frescoes. On a small plateau about halfway up the side of this rock he built a gateway in the form of an enormous lion (Wiki-Click for more info)

We then went to a traditional village tour on a Cow cart, boat, tuktuk and on an elephant back whose name was Sita… finished the day with a relaxing Ayurvedic body massage. 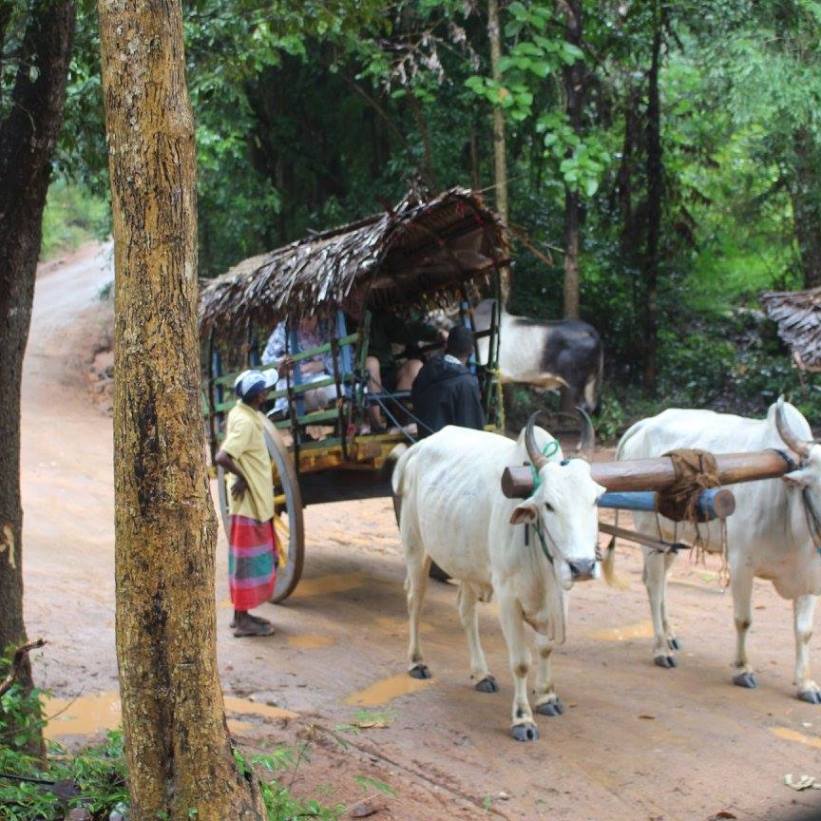 Last day of our round trip. After breakfast we went to the Scared city of  Anuradhapura. Anuradhapura is a major city in Sri Lanka which now an UNESCO World Heritage Site. Anuradhapura is one of the ancient capitals of Sri Lanka, famous for its well-preserved ruins of an ancient Sri Lankan civilization. It was the third capital of the Kingdom of Rajarata, following the kingdoms of Tambapanni and Upatissa Nuwara. 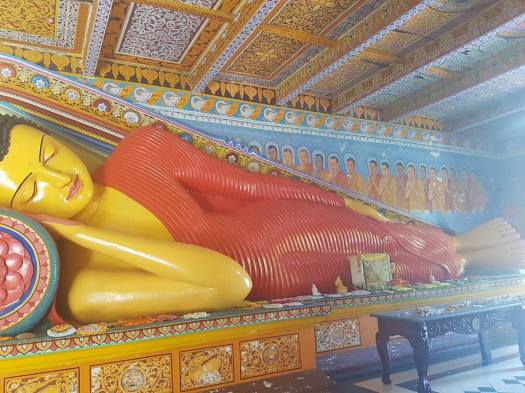 Finally, back to Colombo after a short stop over at Negombo Beach for the best seafood lunch at a seaside restaurant called the King Coconut.

We attended both Christain and Buddhist wedding ceremonies of the beautiful couple Pearl and Clive. The Galle Face hotel is a must visit and visit the rooftop restaurant/bar at the Kingsbury hotel around the same area.

Colombo city tour on a tuktuk… Galle Face Green, Old Dutch Hospital, Clock Towers, Lighthouse, Beira lake, Independence Memorial Hall, Raja Vihara Temple, Jami-Ul-Alfar Mosque, Pettah floating market, Ganga Rama Temple, Slave Island, and so on…. Ended the day at the Ministry of Crab with a kilo of Crab (must try the Chilli Garlic one!). A city for all religions, all cultures and all thoughts……The city where old meets new in every corner 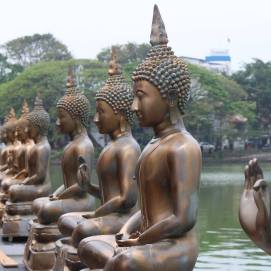 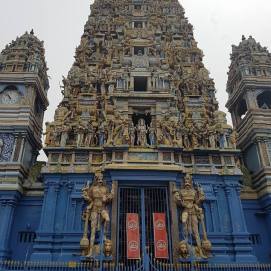 Note: Try the Ministry of Crab, King Coconuts whenever you go and Everything Devilled and remember Srilanka is beautiful and there is a lot to see, but you need to plan it right. Self-driving is not a good option as the roads are not very well marked and it’s very easy to get lost. Try to get local help and advice as much as possible. It is a land of amazingly nice people!

The Amazing Racist by Chimi Tenduf-La

An English school teacher in Colombo, wants to spend his life with a vibrant Sri Lankan beauty, but there’s an obstacle- her orthodox terror of a father who wants his daughter to marry someone of the same race, religion and caste, and if possible from the same locality.

In a desperate bid to make his dream a reality he tries to connect  in other ways – eating curries that make him bleed spice and breathe fire, driving drunk through red lights, threatening co-workers with violence, and sleeping with snakes.

Sparkling with wit and featuring an endearing cast of characters, The Amazing Racist is the story of a man who finds a home among strangers, of a father-in-law whose bark is worse than his bite, and of bonds that grow to be stronger than family ties

View all posts by siffztraveldiary